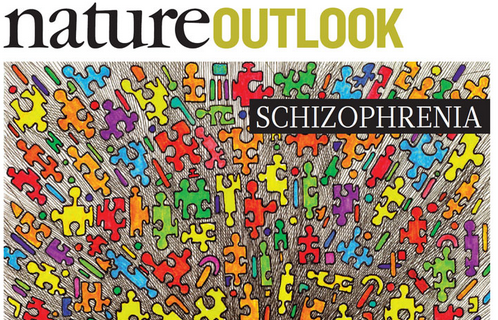 Phil Campbell,  the editor-in-chief of the prestigious and high quality scientific journal “Nature,” (based in the UK) has long been interested in schizophrenia and mental health concerns.  I’ve met him and discussed this interest last year when he was visiting the United States.  He is one of the founding members of of an important new mental health research funding group in the UK (funded with over $20 million in initial money) called JoinMQ which hopes to fund innovative new research that moves us towards a cure for major mental illnesses.

With this background in mind and Nature’s excellent reporting, I don’t find it at all surprising that the journal Nature has created an excellent news special that is entirely focused on schizophrenia, including a video.  I recommend you read all of these articles that are part of this special, and view the video at the bottom of the series.  Its a little more scientific than for general public – but its such important coverage that its a must-read for family members and others who’s lives have been impacted by schizophrenia. Special thanks to Nature for making this information “open access” for everyone to read and benefit from.

Aetiology: Searching for Schizophrenia Roots – Sixty years after the first schizophrenia drug hit the market, researchers are still struggling to understand and treat the disorder.

Developing Countries: The Outcomes Paradox – Schizophrenia patients in developing countries seem to fare better than their Western counterparts. Researchers are keen to find out why.

Language: Lost in Translation – Unravelling the mystery of verbal dysfunction in schizophrenia could yield clues to the nature of the disease.

Genetics: Unraveling Complexity – A massive research collaboration is revealing hundreds of genes underlying schizophrenia risk, and may point the way to targeted treatments.

Drug Development: The Modelling Challenge – Researchers have made good progress with animal tests for cognition. The next step is to devise a rodent model for drug development.

Therapeutics: Negative Feedback – Schizophrenia debilitates not just by psychosis but by depriving people of the ability to feel pleasure.

Perspective: Revealing Molecular Secrets – The more we study the genetics of schizophrenia, says Steven E. Hyman, the more daunting — and exciting — are the challenges we see ahead.

Schizophrenia Prevention: Before the Break – Paying attention to risk factors and warning signs could avert some cases of schizophrenia — or at least better prepare people for what’s to come.

Aging – Living Faster, Dying Young – People with schizophrenia show signs of accelerated ageing — a phenomenon that could lead researchers to a deeper understanding of the disease.