previous
Gray Matter Loss in Brain Due to Psychotic Episodes / Schizophrenia, Not From Medications
random
next
Why Tom Insel Ditched the NIMH to Join Google / Alphabet
33577 views 45 likes 0 comments 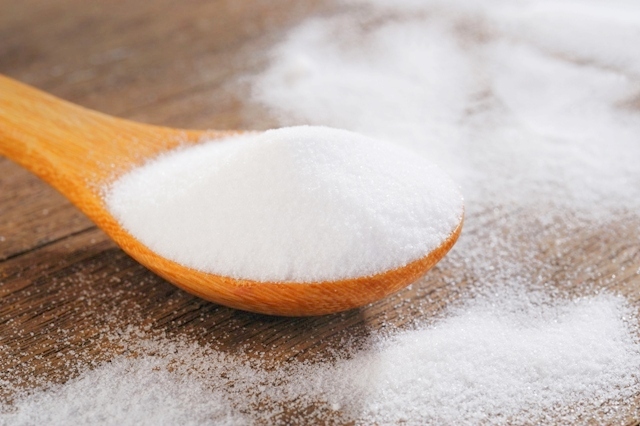 A new study out of Poland’s Medical University of Lodz has found that 6 months of use of a nutritional supplement called sarcosine (N-Methylglycine) seems to reverse the damage to the brain’s glutamate system and improves the negative and cognitive symptoms (memory, concentration, social activity interest, motivation, etc. ) of people who have schizophrenia.

This is just the latest of a number studies during the past decade that have shown positive effects of sarcosine, and other related compounds that impact the glutamate systems, and have been shown to help people who have schizophrenia.

Glutamate is heavily concentrated in the hippocampus, an area of the brain thought to be significantly responsible for memory and cognition, and which many researchers now think may be the area whose dysfunction is the root cause of schizophrenia. This theory is called the Glutamate Hypothesis.

This research study also reported that the sarcosine simultaneously improved mental state of patients with schizophrenia, as measured by the PANSS (Positive and Negative Symptoms Scale), a common measurement tool for the severity of schizophrenia symptoms.

In summary, the researchers stated

“This is the first study showing that… augmentation of the antipsychotic treatment with sarcosine, may reverse the pathological increase in glutamatergic transmission in the hippocampus” [of people who have schizophrenia].

Additionally, “The results confirm involvement of glutamatergic system in the pathogenesis (development) of schizophrenia and demonstrate beneficial effects of GlyT-1 inhibitor [sarcosine] on the metabolism in the hippocampus and symptoms of schizophrenia.

Since this is the first study showing that the addition to antipsychotic treatment with sarcosine for 6 months may reverse the harmful increase in glutamate the study will need to be duplicated by other research groups.

There is, however, already a significant amount of research completed on the role of sarcosine, and related NMDA receptor co-agonists and their ability to reduce some of the negative symptoms of schizophrenia, as shown in the image below. You can read a summary of this sarcosine / glycine research here. 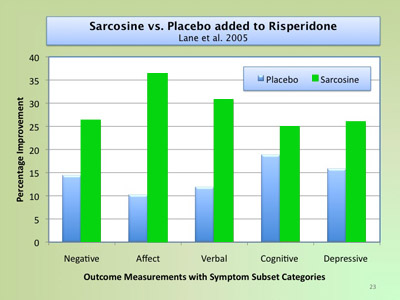 This study is just one of a number of related studies that are coming out of this research group in Poland.  They have been conducting a longer term clinical trial of sarcosine in schizophrenia and have already published a number of reports on their findings.  Two previous case studies can be seen here:

Two grams of sarcosine in schizophrenia – is it too much? A potential role of glutamate-serotonin interaction.

Hypomania after augmenting venlafaxine and olanzapine with sarcosine in a patient with schizophrenia: a case study

Interestingly, new research is suggesting that up to 4 grams a day may be helpful for some people.  See this recent research study:

Safety, tolerability and pharmacokinetics of open label sarcosine added on to anti-psychotic treatment in schizophrenia

We expect a number more papers from the Poland-based research group over the coming year.

In the mean time, people are already trying the supplement.  One user recently posted a poll on people’s experiences with sarcosine in our discussion forums and has so far gotten this response: 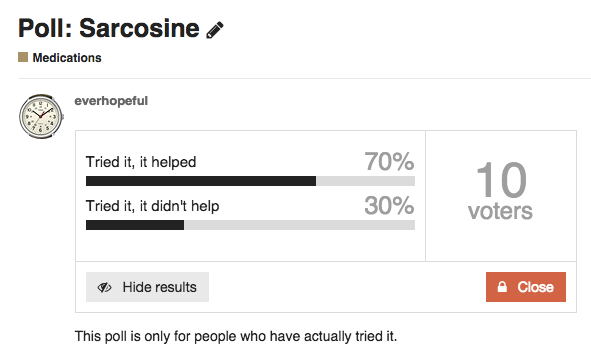 If you’re tried sarcosine already, please respond to the poll and add your own comments: (Sarcosine Poll)

Background: The Glutamate system, the main stimulating system of the brain, is believed by many researchers to play an important role in the development of schizophrenia. Additionally, the Hippocampus, a structure crucial for memory and cognitive functions is rich in glutamate-oriented neurons.