Brain Signals are Altered in Schizophrenia, May Lead to Biomarker 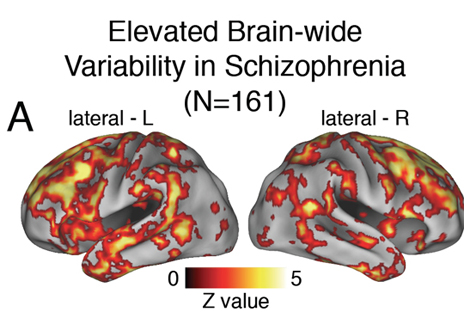 Yale researchers have discovered that there is a broad disruption of neurological signals while the brain is at rest in people suffering from schizophrenia, and this new research has increased the hopes of finding biological markers for for the disorder that can be used to diagnose it.

Analyzing brain data that is usually discarded by investigators, researchers at Yale have discovered important details about how variability of brain signals and brain-wide neural disruptions may contribute to symptoms of schizophrenia. The results,  are reported online ahead of print in the Proceedings of the National Academy of Sciences.

Previous studies on this topic have typically discarded global brain signals due to methodological reasons, treating it as a clinically meaningless variable. However, the Yale team suggests that the global signal, averaged across the brain, is profoundly altered in schizophrenia. “To our knowledge these results provide the first evidence that global whole-brain signals are altered in schizophrenia, calling into question the standard removal of this signal in clinical neuroimaging studies,” said Alan Anticevic, assistant professor in psychiatry at the Yale School of Medicine and senior author of the study.

These novel results have vital and broad implications in the search for new biomarkers of neuropsychiatric illnesses, a search that is a prominent goal of the National Institute of Mental Health. Identifying new ways of classifying mental disorders based on observable behavior and neurobiological measures could lead to earlier interventions and improved patient outcomes.

Additionally, the team used mathematical models, built from the level of neurons, to simulate brain-wide activity and inform neurobiological mechanisms behind reported findings. Perturbing the strength of overall connectivity inside the mathematical model closely matched schizophrenia results. The team’s state-of-the-art mathematical models were developed by John Murray, a post-doctoral associate at New York University, and Xiao-Jing Wang, professor of neural science at New York University and provost of NYU Shanghai. Murray and Wang are co-authors of the study.

“Our findings provide strong evidence that schizophrenia is associated with increased widespread neural variability, a diagnostically-specific effect that was also related to patients’ symptoms.” said Genevieve Yang, an MD/PhD candidate at Yale School of Medicine and first author of the study.

Why Tom Insel Ditched the NIMH to Join Google / Alphabet