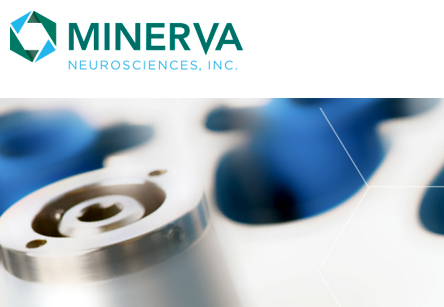 MIN-101 – A new medication for the Treatment of Schizophrenia

Minverva Neurosciences is developing the first lead product candidate, MIN-101, an innovative antagonist on 5-HT2A and sigma2 receptors, for the treatment of patients affected by schizophrenia. The pharmacological effects of MIN-101 are caused by MIN-101 blocking serotonin receptors and sigma receptors, two receptors in the brain that regulate mood and anxiety. MIN-101 is meant to block a specific subtype of serotonin receptor called 5-HT2A. When 5-HT2A is blocked, certain symptoms of schizophrenia (in particular positive symptoms) and side effects of antipsychotic treatments can be minimized. Additionally, blocking 5-HT2A promotes slow wave sleep, a sleep stage which is often disrupted in patients with schizophrenia. MIN-101 is also meant to block a specific subtype of sigma receptor called sigma2, which is involved in movement control, psychotic symptom control and learning and memory. Blocking sigma2 also modulates other neurotransmitters in the brain, in particular dopamine. Individuals with schizophrenia often have elevated levels of dopamine in their brains. Blocking sigma2 also increases calcium levels in neurons in the brain, which can improve memory. Patients suffering from schizophrenia suffer from one or more of the following:

There are many therapies currently approved for the treatment of schizophrenia. However, most current therapies are geared primarily towards treating positive symptoms and there are no current treatments specifically approved for the treatment of negative or cognitive symptoms. Approved treatments generally result in significant side effects, including sedation, involuntary movements, prolactin increase, metabolic syndrome, cognitive impairment, sleep disorders and weight gain. These side effects and the lack of efficacy on negative and cognitive symptoms contribute to a high rate of treatment discontinuation of between 60% to 80% over the course of 18 months, according to Datamonitor.

Unlike current therapies, Minverva Neurosciences believes MIN-101, at the anticipated dose and dosing schedule, due to its particular pharmacological profile, has the potential to address negative symptoms as well as the positive and cognitive symptoms of the disease, sleep and overall psychopathology, without many of the typical side effects of existing approved therapies, such as involuntary movements, prolactin increase, sedation, sleep disorders, weight gain and metabolic syndrome. We intend to seek approval for MIN-101 initially as a first line monotherapy and also plan to study its use as an adjunctive therapy. We believe that MIN-101 could address the existing treated population and those who are not being treated successfully with the currently available therapies. In a Phase IIa clinical trial, a statistically significant improvement of negative symptoms and a non-statistically significant trend toward the improvement of positive and cognitive symptoms, and overall psychopathology was observed after three months of administration of MIN-101. The trial also showed that MIN-101 could have sleep promoting effects, in contrast to currently available therapies with no negative effects on sleep as measured by polysomnography. We plan to initiate a small clinical trial in the second quarter of 2014 to confirm earlier Phase I results, using a once a day formulation, in preparation for conducting a Phase IIb trial of MIN-101 in the second half of 2014 in Europe. We also plan to investigate the effects on sleep, cognition, anxiety and mood, as well as clinical and biological safety and drug plasma levels.