Stem Cell Transplants May be a New Treatment for Schizophrenia 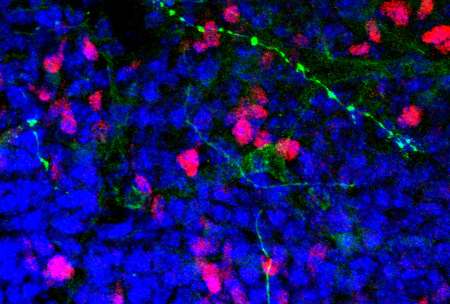 Stem cells show great promise for permanently treating many diseases and disorders but perhaps one of the areas where we are most excited about its possibility is in the area of serious mental illness.  Research from the School of Medicine at The University of Texas Health Science Center at San Antonio demonstrates the exciting possibility of using cell transplants to treat schizophrenia. This experimental research on rats suggests transplanting stem cells could be a permanent cure for schizophrenia.

Cells called “interneurons” inhibit activity within brain regions, but this braking or governing function is impaired in schizophrenia. Consequently, a group of nerve cells called the dopamine system go into overdrive. Different branches of the dopamine system are involved in cognition, movement and emotions.

“Since these cells are not functioning properly, our idea is to replace them,” said study senior author Daniel Lodge, Ph.D., assistant professor of pharmacology in the School of Medicine.

Dr. Lodge and lead author Stephanie Perez, graduate student in his laboratory, biopsied tissue from rat fetuses, isolated cells from the tissue and injected the cells into a brain center called the hippocampus. This center regulates the dopamine system and plays a role in learning, memory and executive functions such as decision making. Rats treated with the transplanted cells have restored hippocampal and dopamine function.

Stem cells are able to become different types of cells, and in this case interneurons were selected. “We put in a lot of cells and not all survived, but a significant portion did and restored hippocampal and dopamine function back to normal,” Dr. Lodge said.

‘You can essentially fix the problem’

Unlike traditional approaches to treating schizophrenia, such as medications and deep-brain stimulation, transplantation of interneurons potentially can produce a permanent solution. “You can essentially fix the problem,” Dr. Lodge said. “Ultimately, if this is translated to humans, we want to reprogram a patient’s own cells and use them.”

After meeting with other students, Perez brought the research idea to Dr. Lodge. “The students have journal club, and somebody had done a similar experiment to restore motor deficits and had good results,” Perez said. “We thought, why can’t we use it for schizophrenia and have good results, and so far we have.”

The study was published in Molecular Psychiatry.