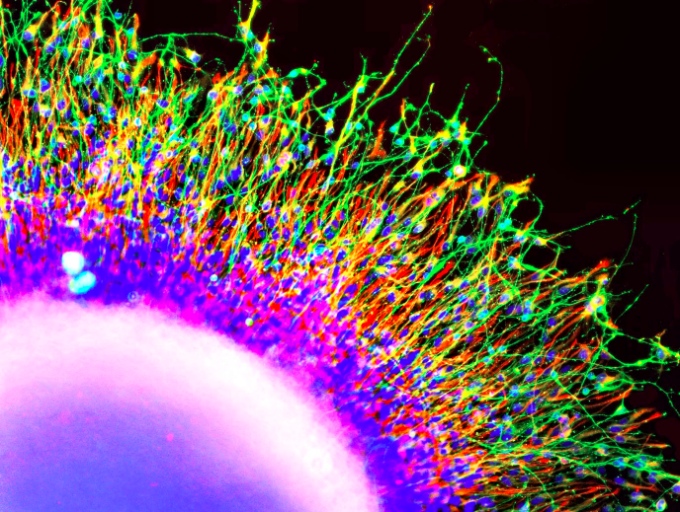 A new study completed by researchers at the Salk Institute of Biological Sciences show fundamental differences in early neurons from patients with schizophrenia, supporting the theory that risk for the disease may begin in the womb during pregnancy.

Using new stem cell technology, scientists at the Salk Institute have shown that neurons generated from the skin cells of people with schizophrenia behave strangely in early developmental stages, providing a hint as to ways to detect and potentially treat the risk for the disease early.

The findings of the study, published online in April’s Molecular Psychiatry, support the theory that the neurological dysfunction that eventually causes schizophrenia may begin in the brains of babies still in the womb. (learn more about the causes and prevention of schizophrenia).

“This study aims to investigate the earliest detectable changes in the brain that lead to schizophrenia,” says Fred H. Gage, Salk professor of genetics. “We were surprised at how early in the developmental process that defects in neural function could be detected.”

Currently, over 1.1 percent of the world’s population has schizophrenia, with an estimated three million cases in the United States alone. The economic cost is high: in 2002, Americans spent nearly $63 billion on treatment and managing disability. The emotional cost is higher still: 10 percent of those with schizophrenia are driven to commit suicide by the burden of coping with the disease.

Although schizophrenia is a devastating disease, scientists still know very little about its underlying causes, and it is still unknown which cells in the brain are affected and how. Previously, scientists had only been able to study schizophrenia by examining the brains of patients after death, but age, stress, medication or drug abuse had often altered or damaged the brains of these patients, making it difficult to pinpoint the disease’s origins.

The Salk scientists were able to avoid this hurdle by using stem cell technologies. They took skin cells from patients, coaxed the cells to revert back to an earlier stem cell form and then prompted them to grow into very early-stage neurons (dubbed neural progenitor cells or NPCs). These NPCs are similar to the cells in the brain of a developing fetus.

The researchers generated NPCs from the skin cells of four patients with schizophrenia and six people without the disease. They tested the cells in two types of assays: in one test, they looked at how far the cells moved and interacted with particular surfaces; in the other test, they looked at stress in the cells by imaging mitochondria, which are tiny organelles that generate energy for the cells.

On both tests, the Salk team found that NPCs from people with schizophrenia differed in significant ways from those taken from unaffected people.

In particular, cells predisposed to schizophrenia showed unusual activity in two major classes of proteins: those involved in adhesion and connectivity, and those involved in oxidative stress. Neural cells from patients with schizophrenia tended to have aberrant migration (which may result in the poor connectivity seen later in the brain) and increased levels of oxidative stress (which can lead to cell death).

These findings are consistent with a prevailing theory that events occurring during pregnancy can contribute to schizophrenia, even though the disease doesn’t manifest until early adulthood. Past studies suggest that mothers who experience infection, malnutrition or extreme stress during pregnancy are at a higher risk of having children with schizophrenia. The reason for this is unknown, but both genetic and environmental factors likely play a role.

“The study hints that there may be opportunities to create diagnostic tests for [people at increased risk of] schizophrenia at an early stage,” says Gage, who holds the Vi and John Adler Chair for Research on Age-Related Neurodegenerative Disease. 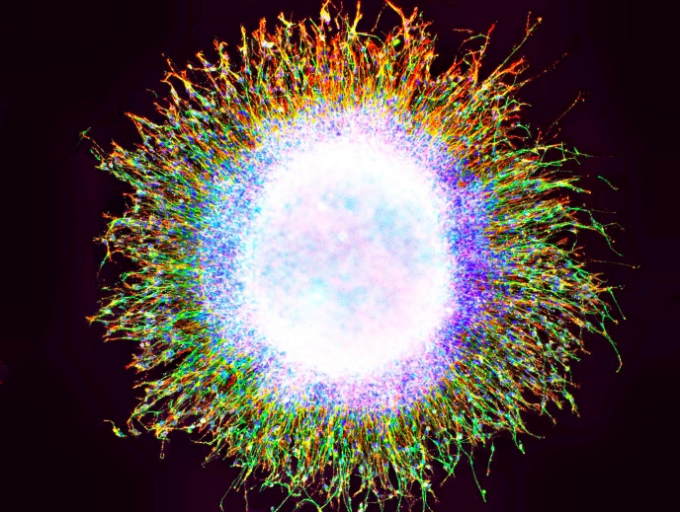 This image shows the movement of patient-derived neural progenitor cells from a sphere of neurons in a migration assay. How far and quickly the neurons move indicates whether they may behave atypically in the brain. Image: Courtesy of the Salk Institute for Biological Studies

Kristen Brennand, the first author of the paper and assistant professor at Icahn School of Medicine at Mount Sinai, said the researchers were surprised that the skin-derived neurons remained in such an early stage of development. “We realized they weren’t mature neurons but only as old as neurons in the first trimester,” Brennand says. “So we weren’t studying schizophrenia but the things that go wrong a long time before patients actually get sick.”

Interestingly, the study also found that antipsychotic medication such as clozapine and loxapine did not improve migration in NPCs (in particular, loxapine actually worsened migration in these cells).

“That was an experiment that gave the opposite results from what we were expecting,” says Brennand. “Though in hindsight, using drugs that treat symptoms might not be helpful in trying to prevent the disease.”

The next steps to this work will be to increase the sample size to a broader range of patients and to look at hundreds or thousands of patient samples, says Brennand.